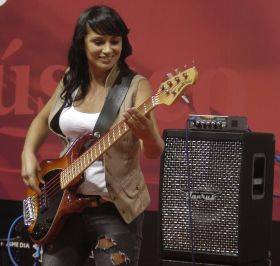 In 1999 Brigitte starts to work as a bass player and double bass with the most important Latin music bands in the Canary Islands, reinforcing her knowledge of Afro-Caribbean music. So, in 2004 she does her first movement in modern music with styles that goes from Latin jazz, Pop, Rock and Hard Metal. Is in this period where she joins several bands from the Islands like Mussa, touring Ireland and England, apart from being one of the representative bands in Womad, ethnic music festival sponsored by Peter Gabriel.

In 2011 travels to Madrid and starts to move in the most relevant Blues Funk and Rock circles. It is in 2012 when she gets to audition in what is her most recent work as a live musician, Alejandro Sanz, joining the world tour of "la música no se toca", recording cd/DVD in Seville.

Sold out
Sold out