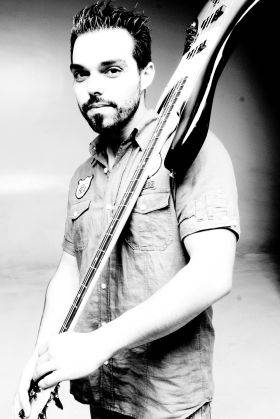 He was born in Portugal in 1980,he is a musician, composer and producer since 1996 He started to study music with six years old in Ponta Delgada (Azores) in the Yamaha Conservatory , started with piano lessons and with 14 year he started playing bass and studied with Portuguese renowned bass teachers, Paulo Nascimento, Tó Andrade and Joăo Sanguinheira. He recorded, produced and played with various projects and artists Portuguese and International like, Nu Soul Family (PT), Alma (PT), Puzzle (PT), Julie Mcknight (US), Atiba Martin (US), Guto Pires (GN) , Neyma (MZ), Zoe Jones (UK), etc.

In 2010 he was distinguished on is main project, Nu Soul Family with the MTV Award for the best Portuguese Band and Live Act and nominated forthe European Music Awards.

''On the day my friend showed me Taurus bass amps it was the first time a considered changing the amp bass I was playing for 15 years, when he turned the Qube-450 on, it just blew my mind, how could such a little amp sound so good and with so much power?! Well now MY Qube-450 goes with me everywhere, it doesn't matter if I'm playing for 200 or 40000 people I just know it will handle the job and with an awesome tone!!''